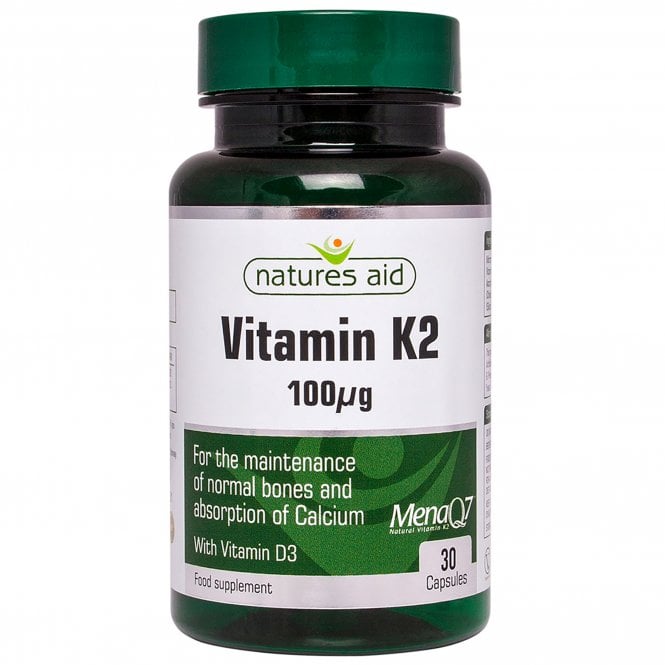 Trustpilot
Item in Stock Item out of Stock | Usually dispatched within 24 hours
Loading...
Made In The UK Shipped Internationally
Manufactured To GMP Standards The highest quality products
100% Naturally Sourced Our ingredients are 100% Natural

Vitamin K2 supplement with Vitamin D3, for the maintenance of normal bones and absorption of calcium

Most people are aware of the importance of Vitamins C and D, but the benefits of Vitamin K are less well known.  There are two forms of Vitamin K – Vitamin K1 and Vitamin K2.  Vitamin K1 is found in green leafy vegetables and supports normal blood clotting.  Vitamin K2 is formed in the body from Vitamin K1, and it is Vitamin K2 which is has been shown to support healthy bones. The only food which directly supplies Vitamin K2 is a fermented chickpea dish often eaten in Japan, called Natto. As it is not easily obtained through your diet, many people may choose to use a supplement to ‘top up’ levels of Vitamin K2.

At Natures Aid, our Vitamin K2 has been carefully formulated by our in-house experts using a clinically validated and patented form of Vitamin K2 called MenaQ7.  MenaQ7 is vegan friendly, and free from gluten, dairy, soya and other common allergens.  It is also said to be the most bioactive form of Vitamin K2 on the market and has been used in many clinical trials investigating the potential benefits of this little know vitamin.

Our Vitamin K2 supplement has been formulated to also include Vitamin D, providing additional support for your bones. Vitamin D contributes to normal calcium absorption and the maintenance of healthy bones, making it the perfect partner for Vitamin K2.

Take 1 capsule per day with food. Do not exceed the recommended intake